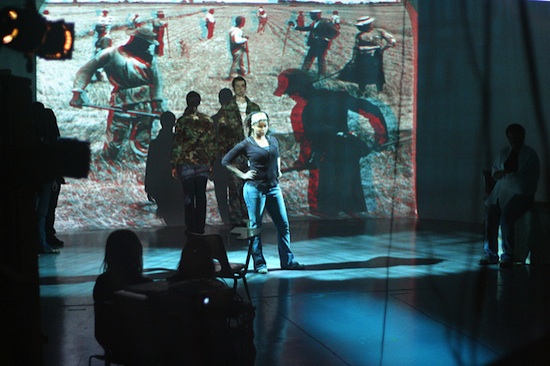 Description:
365 Days/365 Plays was the result of Pulitzer-Prize winning playwright, Suzan-Lori Parks decision to write a play a day for a year. In 2006/7, cooperating regional and university theatres produced the plays in their originally written order in multiple productions occurring simultaneously across the country.

“At the University at Buffalo, the Intermedia Performance Studio (IPS) produced a Week 24 – 7 plays from Parks’ 365 Days/365 Plays, from April 23-April 29. Following Parks’ interest in theatre as the means to reflect upon the process of dramatic writing, the collaborators of the IPS – including computer scientists, designers, actors, and programmers – approached a week’s worth of plays as a similar reflection upon notions of “writing” and acting in virtual and mediated contexts. Specifically, we addressed performances to the question of artificial intelligence in performance and the effect of computer-based agents as actors. Amid recent theories of cyborg theatre and posthuman performance, we believe these explorations of mediated agency in performance can open up new forms of engagement for live performance.” Sarah Bay-Cheng

Collaborators: Sarah Bay-Cheng, Dave Pape, Josephine Anstey and many others (sorry I am missing documentation)