Description: The Office Diva is an audio-visual installation; a large scale projection of an autonomous virtual character trapped in a claustrophobic space and compulsively talking. The Office Diva simulates a psyche made monstrous by madness, whining and writhing as she obsesses over her life. The audience hears her never-ending stream-of-consciousness rant, and sees her as a fiery homunculus barely holding together. It becomes clear she is a disturbed mind trapped by her own solipsistic and unreal processing of daily events. The Office Diva has a kind of artificial life – but it is an internal life played out in psychic space. Primarily the project is an examination of a consciousness ruled by manic-depression, but since the Office Diva is in many ways a machine, the work plays with the ways in which mad and machinic behavior can manifest in similar ways. 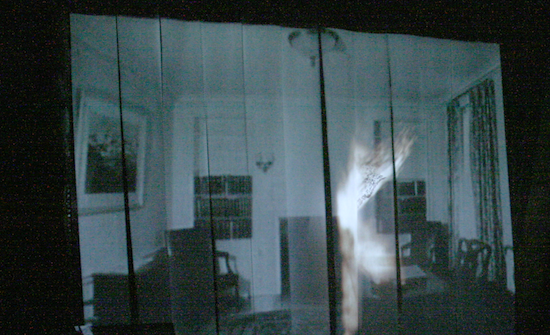 Phoebe Sengers argues that the modular design of some intelligent agents makes them hard to understand, they appear to be a schizoid assemblage of random, unmotivated behaviors. Contari-wise the computational limitations of other agents have been masked by their insane personalities. Repetitions, lack of affect, inappropriate responses, and non-sequiturs are signs of disturbed people as well as machines.

In this project, we deliberately chose a bland machine voice, that speaks the stream-of-consciousness text which is generated, re-ordered and reassembled by a machinic algorithm. But, just as deliberately, we massage the relationship between text and code so that our “mad” consciousness is not so badly fragmented and fractured as to be indecipherable to a human audience. Over time the bland voice reveals a mad, sad story: a pedestrian story of a receptionist; a perfectionist who works too hard in her small therapy center; a critical observer who sees too much going wrong and strives to fix it; an office Don Quixote tilting at the windmills of petty inefficiency and corruption; a woman slowing exploding.

The voice comes from the psychic emanation of the Office Diva: a larger than life projection of her ego. The graphics represent another synthesis between machine and human; procedural animation creates the flaming or dripping archetype that forms into a dimly human form, that is then reanimated with motion capture. The Diva’s anima swirls chaotically in response to the internal narratives she retells so intently. She drifts in the dimly seen and utterly mundane office environment that has taken on so much over-determined significance.

Tech: The Office Diva installation comprises computer, projector and screen. A python scripting layer controls and synchronizes the graphics and speech synthesis. The graphics consist of particle systems written in c++, which are attached to a skeleton which has been defined by motion capture. A library of motion captured elements is pre-produced, the procedural animation is created in real time. Original text fragments were written by the artists. A c++ program accesses the Apple speech to text tool, and feeds the system the text fragments. A python script controls text and graphics and produces a stream of consciousness character. The script defines a structure for the character. The structure has an initial state which recombines text & graphic fragments using chance operations but preserving a dramatic structure which makes the Office Diva’s story intelligible. The script also controls a mood changing element determined by the particular context of the installation. This feature periodically degrades the dramatic structure, increases the visual and auditory agitation of the character, and corresponds to a psychological crisis.