Workers of the World, robot performance, 2008 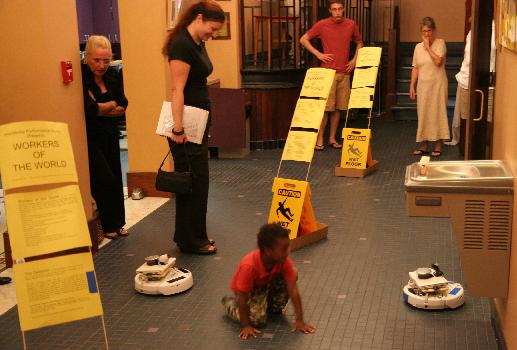 Description: Workers of the World is a guerilla-style performance for autonomous cleaning robots. The robots are set down in a public location and as they clean each robot speaks a stream of consciousness text drawn from three 20th century plays with strong revolutionary themes. When they detect humans, they address remarks to them. They respond in a variety of ways depending on their mood. They may be jocular or irritated, but their remarks always point up the differences between workers and the rest.  If a robot encounters another robot, their streams of consciousness texts are influenced The text elements for this project were drawn from The Decision  by Bertolt Brecht (1930), The Balcony  by Jean Genet (1957) and Marat/Sade  by Peter Weiss (1964). In different ways, the plays are about people who are outside societal rules and norms and therefore have a stake in changing them: revolutionaries, sex radicals and mad people. Each robot is designed to define one of these outsider personalities, and its text is drawn from just one play.

Tech: Each of three robots of the Workers of the World  project was physically composed of an iRobot Create robot with an Eee PC laptop, an iPod-style speaker, and a web camera mounted on top. Robot intelligence was programmed using the SNePS AI system and Grounded Layered Architecture for Integrated Reasoning (GLAIR), a three-level architecture for cognitive robots and intelligent autonomous agents. The AI software controlled the robots physical behavior and the text that they spoke. About 50 short (i.e. 1–3 line), pieces of text were selected from each play.  Each text fragment was tagged with one or more themes, including: revolution, strategy, fantasy and madness. Each robot mind randomly selects one of its themes and then randomly selects a speaking part from the theme until each one is spoken once.  The robots converge on a theme when in close proximity with another robot.