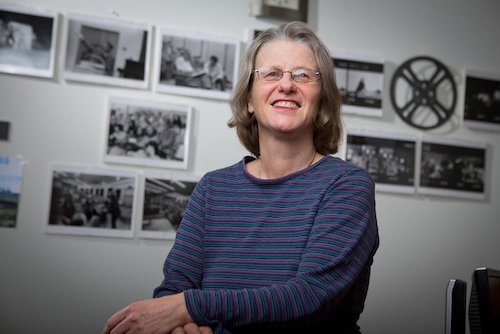 Josephine Anstey’s career has been concept and project driven, engaging with a wide variety of media practices and technologies. Experiments with narrative & dramatic forms and questions of identity & consciousness have been constant themes. Currently she is making animations with clay figures Pik and Etty about economics (video 1, video 2) and writing a scifi/ecofiction novel.

Her early work includes a long collaboration with Julie Zando on a series of video-art pieces. Other early projects include radio documentary, web and prose fiction. From 1995, she refocused on the production of interactive computer-mediated experiences: stories, performances and games. This resulted in works of interactive drama, virtual & mixed reality, and intermedia performance populated by intelligent agents, networked human actors, and puppet avatars.

Between 2001 and 2005 she was part of a group of artists who exhibited networked VR projects worldwide on CAVE systems and low-cost, CAVE-like VR systems. She is a founding member of the Intermedia Performance Studio at the University at Buffalo, an experimental center for collaboration among media creators, dramatic performers, and computer technologists.

Her VR and video works have shown widely in the US, in Europe, South America and Asia, and she has work in the permanent collections of the Museum of Modern Art in New York and the Ars Electronica Center, Austria. Her media work has won critical attention: Impcon.org was shortlisted for the People’s Choice in the 2018 Opening Up Digital Fiction Writing Competition; The Bicameral Emulation Exercise was part of Enact: Art in the Mind (Curators Yanuzzi & Torke) which received a Jury Selection at the Japan Media Arts Festival, 2014.  Her videos have won awards including Best Narrative Video Award at the Atlanta Film and Video Festival 1990. In 1996 she won the Chelsea Award for short fiction and in 1997 she won Multimedia Grand Prix 97 Award from the Multi-Media Content Association of Japan.

She is a Professor in the Media Study Department of the University at Buffalo (UB), where she teaches production and analysis courses focusing on game studies, electronic literature, virtual reality and responsive environments. She is a professor in the Department of Environment and Sustainability (UB) where she teaches about media and the environment. She has an MFA from the Electronic Visualization Laboratory, University of Illinois at Chicago; an MA from the Women’s Studies/American Studies Department of UB; and a BA in English Studies from the University of East Anglia, UK.